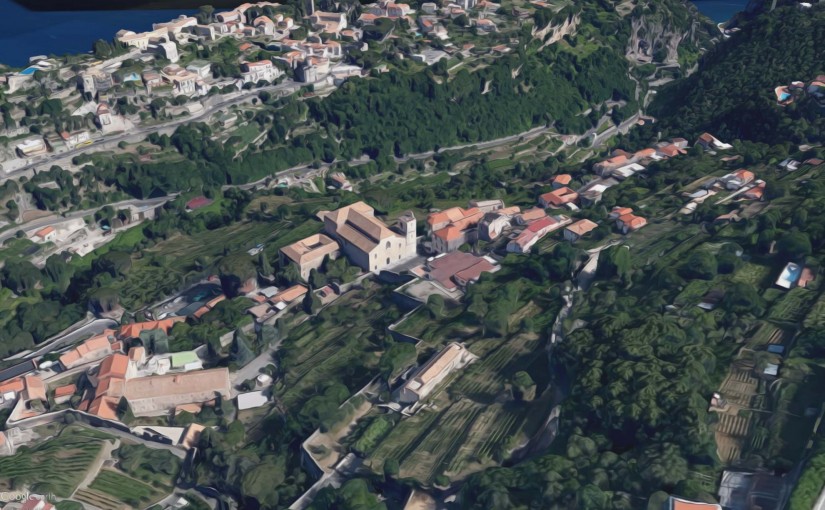 Located about 400 metres above sea level, Scala is the oldest town on the Amalfi Coast.

Scala is made up of six districts, almost all of which have a church at their heart: Centro, Minuta, Pontone, Campidoglio, Santa Caterina and San Pietro. The name Scala comes from the form of the land, which is almost all on a slope, cultivated with terraces, around the valley formed by the Dragone River.

And, like any self-respecting town, Scala also has a legend of its origin, closely linked with the Roman Empire. According to the Chronicon Amalfitanum, around the year A.D. 339 a group of Patrician families surprised by a storm on their way from Rome to Constantinople took refuge in this place, founding Amalfi, Scala and the other towns on the Amalfi Coast. Scala was easy to protect and very difficult to storm: with high, rocky mountains behind it, the town is protected by the Ravello promontory to the east. When Amalfi was on the rise, as it was impossible to establish new neighbourhoods or towns near the city, most of the excess population settled in satellite towns such as Scala.

In the Middle Ages it was an important outpost of the territory belonging to Amalfi. In the ninth century it was destroyed and entirely rebuilt, with fortifications, ushering in a time of great prosperity which coincided with the golden age of Amalfi.

The cathedral of Scala was originally the parish church of SS Annunziata in Minuta.

Fra Gerardo Sasso was born in Scala in 1040 and went on to found the Order of the Knights Hospitaller, later known as the Knights of Malta, blessed by the Catholic Church.

In 1073 it was burnt down by Robert Guiscard after a long siege; it was then sacked and destroyed by the Pisans, the troops of Otto IV of Brunswick (1210) and the Sicilians after the famous Sicilian Vespers (1283).

Like other cities in the kingdom, Scala had its share of illustrious and distinguished noble families. They included the D’Afflitto, Sasso, Bonito, Coppola, Imperatore, Alfano, Mansella, Bonello, and other families.

Accumulation of wealth made possible by the conspicuous increase in trade and the local families’ involvement in the financial administration of the realm under the Hohenstaufens and the earliest Anjou rulers permitted intense artistic activity, primarily commissioned by the church but also to satisfy the demand for luxury and ostentation of an aristocratic class with a lifestyle particularly sensitive to the refinements of the Arab and Byzantine world. What has survived destruction and alteration over the centuries is enough to give us an idea of local artistic tastes at that time.

During its golden age the city counted 130 churches and five monasteries within its territory, only one of which is still active today, the nunnery of SS Redentore established by St. Alfonso de’ Liguori.

Towards the 14 century the wealthy, noble Frisari family commissioned an expansion of the existing cathedral with its three naves, in honour of St. Lawrence the martyr, patron saint of Scala, along with the bishop’s palace across from it, now Palazzo Mansi.

Ongoing rivalry and wars among the patrician families of Scala and between them and the families of Ravello, along with the outbreak of plague in 1528, brought an age of decline to this opulent, noble city.

Scala regained popularity in the 18th and 19th centuries, when it became an important stop on the Grand Tour so much in vogue among the intellectuals of the day, with its beautiful landscape and numerous churches. The beauty of the landscape is still indescribable: rising up to Contrada Campidoglio, the visitor comes to a staircase climbing to the highest peak of the mountain, offering a marvellous view over Amalfi.

It is a town with thousands of years of history behind it, a wealth of monuments of great artistic and historical value, and all the natural beauty of vast chestnut groves, the luxuriant vegetation of the Valle delle Ferriere national park and terraces planted with lemons and piennolo cherry tomatoes.

The Mansi family now owns the former bishop’s palace, with its inner courtyard with a loggia on two levels and beautiful majolica floor in the Oval Chapel.